The purpose of these two talks is to put mythology into perspective (for the better). Luc Brisson once told me: philosophers don’t work enough on mythology (this, from today’s greatest philologist!) He was referring directly to the foundations of ideas in myth. For us, this imaginative pleasure is far too important. Muthos is the voice and the intelligence of fiction: our job, our task!  EP

The Golden Ass and
the Apparition of Psyche 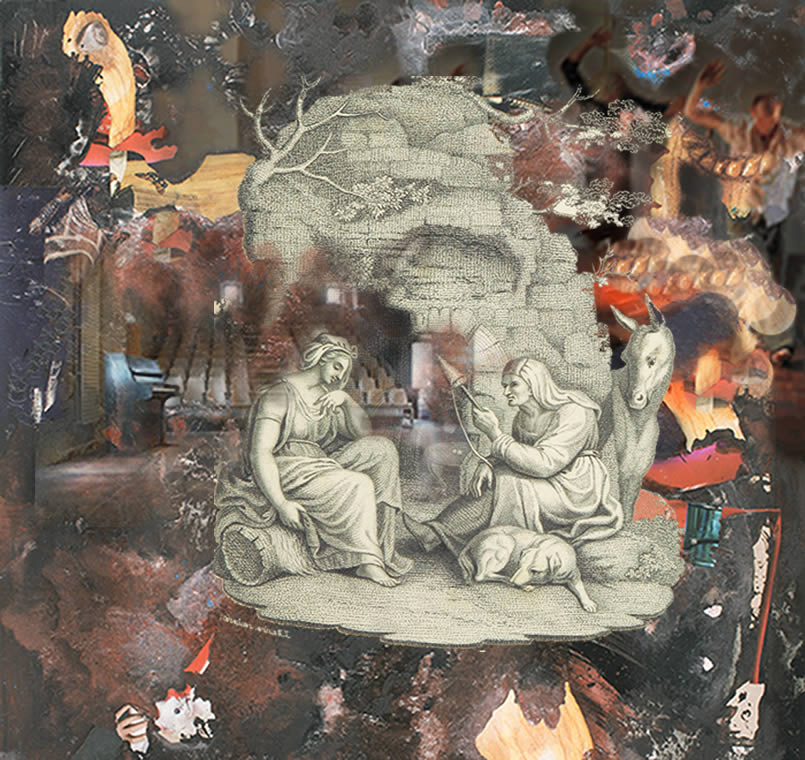 The figure of Psyche only appears towards the end of the 2nd century AD in a novel by Apuleius entitled: The Metamorphoses. First novel or last myth? Why not both? In any case, very late.

It is Saint Augustine who, two centuries later, will call it The Golden Ass – a malicious jibe, but which added to its popularity. Both were born in Algeria, a cultural Mecca. Marcus Aurelius is emperor and the Roman Empire (still pagan) is doing well. The novel, on the other hand, takes place in Thessaly, a hotbed of witchcraft, at the other end of the Empire.

Psyche had not been personified before Apuleius – the fundamental operation of any ‘mythologization‘: her entry into fiction, into gossip and mythical figuration.

The time was full of novels (as ours is full of films). I have a big book in my library with the seven novels that have survived; very few for five centuries of creativity! It’s as if in 1800 years there were only seven films left from our time.

With this charla (chat – hence charlatan), I want to poke around In our 2022 theme: Psyche’s Task, visit Apuleius and the tasks he says that Aphrodite imposed on her.

Reflections on a Non-Homeric God

Dionysus, like Psyche, appears relatively late in Greek narratives. But then, he makes a colossal entrance in Euripides’ The Bacchae in 405 B.C. His absence turned out to be have been mostly class discrimination – of the Homeric kind. He was not an oriental and decadent immigrant: his name appeared already in the cradle of archaic Greece, the Crete of Minos. In 1968 I met Roy Hart as Dionysus. I saw (hallicinated?) his theater in Nietzsche’s The Birth of Tragedy. Then I went my way with and sometimes against Dionysus, a long journey which I would like to share with you.

With the presence of Kaya Anderson and her friends, and contributions from three Dionysus connoisseuses : Linda Wise, Nor Hall and Joëlle Montech.

This conference is also a fundraising event offered to Kaya Anderson for her Bacchae Project, in progress, and to help her after a recent fall and two cracks in one ankle, as she approaches her 90th birthday.